What’s Internal Analytics and how we solved it using gamification Task Magic is a gamification integration for Asana. It is a web app which displays all HKMCI Asana users and their associated ‘level’. A user’s level is a gamified way of displaying their total completed tasks. When users of HKMCI’s Asana complete tasks they receive ‘experience points’ (XP for short) based on the Tasks’ Due Date, Priority and Effort; so that tasks completed early with high priority and a large amount of effort would gain a user more XP than a task completed late, with low priority and little required effort.

The purpose of this tool is to increase morale and motivation by introducing proven gamification elements into a task-oriented work environment.

Data collected by TaskMagic has the ability to redefine internal management. This article will demonstrate the different use-cases of data analysis on TaskMagic.

TaskMagic allows historical data analysis to be performed on each employee’s performance based upon task completion and XP gained. Let’s say you want to figure which of your employees have the most experience. Using the data collected and displayed by TaskMagic, you can quickly identify workers who have the highest XP points. With this insight, you can identify who is the most experienced and get them to train/help those who may be lagging behind in the total XP.

On the other hand, what if you have a new employee and want him/her to be trained to perform all the different types of tasks  Well, then it may make more sense to consider who has completed the most tasks since this person may be the most suitable for this job.

Identifying the distribution of each task 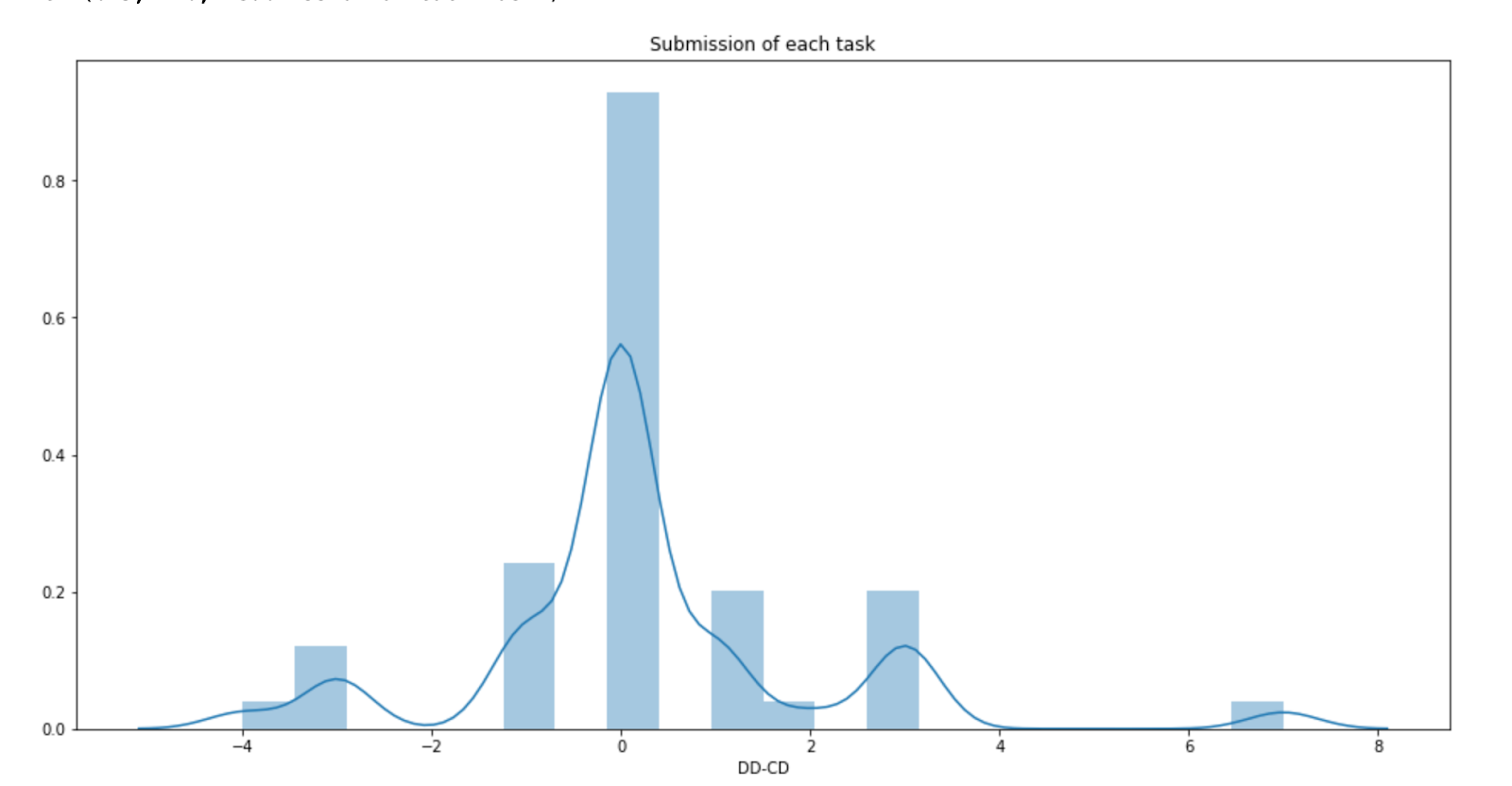 Another thing that may be interesting to consider is how priority, effort and due date vs. date submitted of each task is distributed. For example let’s consider the distribution of task submission by date (Due Date-Date Submitted).

In the distribution plot above, we can see that there is some work completed way before deadlines, while others are completed after deadlines. Since, the center of this plot is at 0 days, it suggests that the overall amount of work assigned to individuals is relatively optimal. If, however, we saw that the mean was on the negative side then it would suggest that employees have too much work assigned, and that they are struggling to keep up with their schedules. This means that the company may need to hire more workers in order to distribute the work accordingly. On the other hand, if the mean was highly positive it may indicate that more work can be assigned to employees as a whole. Therefore, by performing data analysis on TaskMagic a company can monitor the workload placed on its staff, which can inform future planning. 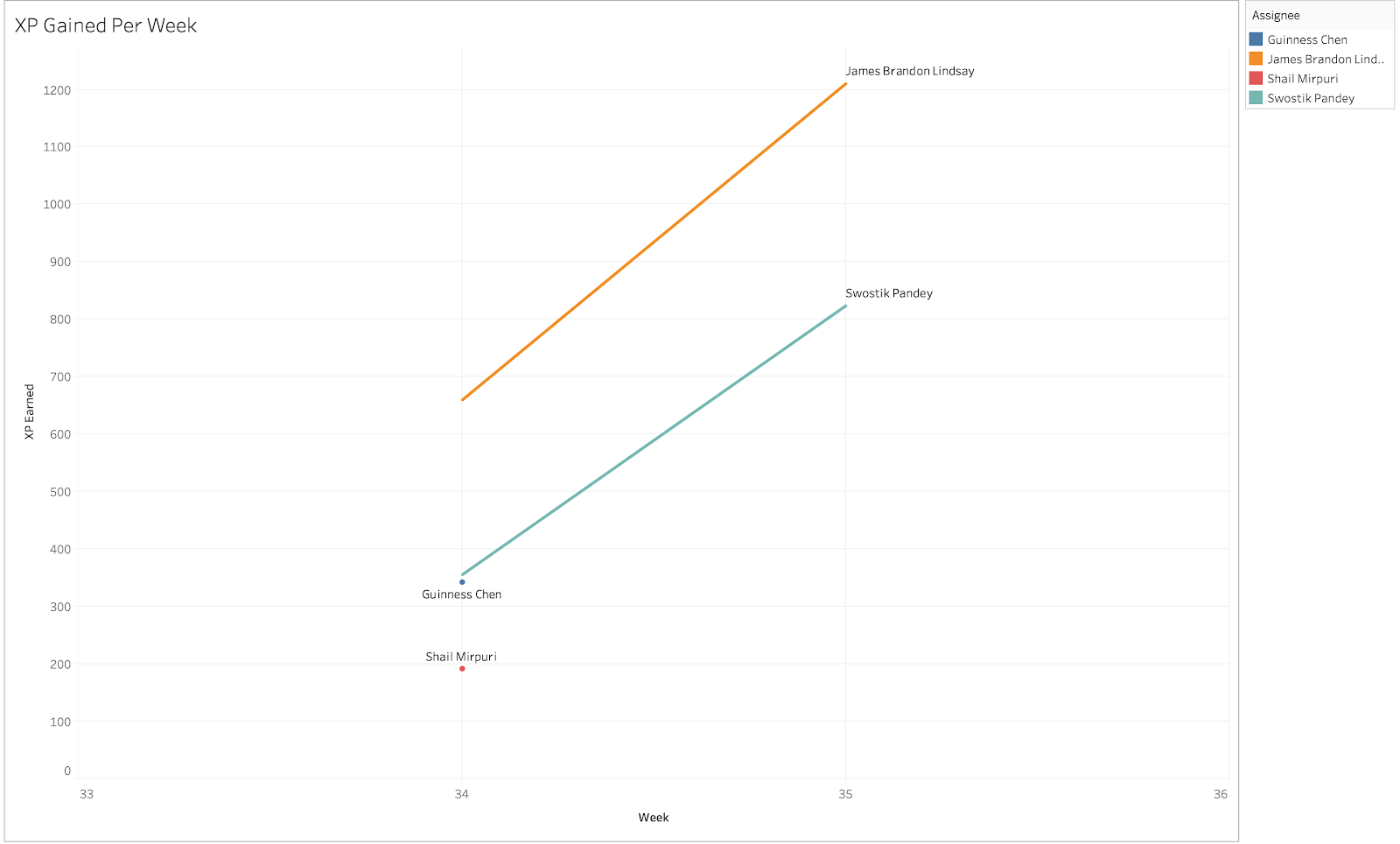 Using data analytics on TaskMagic, a company can monitor its workers’ performances however frequently they like. If a company is concerned about short term performance, it can look at the weekly performance through XP gained per week. Using this, the company can easily see if an individual is working more productively than the previous week. In the long term, this same concept can be used to monitor Quarter on Quarter performance as well as monthly XP gained. Using this approach, a company can set a healthy competition mentality, where workers are motivated to finish tasks and gain XP. This can be expanded further through the recognition of the hardest workers in each department for each month, which will further boost morale.

Apart from monitoring individual performance and milestones, using TaskMagic a company can also track the average daily man hours clocked in per user over time. This allows a company to track busy days, where workers are completing significantly more tasks. This can be built upon even further by looking at trends such as monthly, weekly and even day of the week in order to identify which are the most and least busy days for the company. One example where this insight may be useful is, for instance, if Wednesday is the day with least average effort then the company could implement policies to help boost workers morale and productivity on this day.

If a company wants to take their analysis to the next level, they can also create machine learning models that smoothen the process of internal evaluation. For instance, a K Means clustering model can be built on the aggregated data of all tasks completed and XP earned in order to group all employees into 3 different clusters: Experts, Intermediates and Novices. Using this model, a company can set goals for each of the groups and monitor each group accordingly.

Apart from cluster models, a company can also create a regression model using the employee TaskMagic data. An example of this would be the creation of a linear regression model that predicts how many tasks an individual will complete in a week based upon their level and XP earned. This will help the company plan their expected task completion for a specific week.

Overall, we have demonstrated several use-cases of TaskMagic and how insights derived can be applied to internal management of workers. These are some of the many possibilities that TaskMagic provides. With its ability to redefine the way internal management takes place, it is no doubt that TaskMagic must be adopted by companies. Not only does it allow for greater tracking and accountability of work, but it can help incredibly with a company’s planning efforts.

As a data science research intern for Digital Action Lab, this project has been an amazing experience for me personally. Although my role primarily came into play after the application was built, I found it incredibly interesting to observe the processes that go through app development such as agile development, bugging testing and database implementation. An exposure into the timeline and structure used in the tech industry will undoubtedly be an experience I can draw from even as a prospective data science. The main learning lessons I have taken away from this project is the importance of being versatile in data science. By this, I mean that it is important to be flexible and adapt to any challenges you face particularly in terms of the programs you use to analyse your data and the structure of your database. One of the main challenges I faced was getting the data out of Firestore and into BigQuery for analysis. The reason for this issue was that the data was stored in a NoSQL database, which is a form of unstructured data, while BigQuery can only analyse data that is structured and has defined schemas. After some deep-digging, I found an alternative method of extracting and exploring the data using Python instead of BigQuery. Using Python, I was able to clean up the data, structure it and finally perform some analysis on it. If there’s one thing I have learned from this whole process is that in data science although you have so many tools in the toolkit, it is vital that you understand when to use each of these tools. Google Meet is here to host your video meetings, for free No spam, notifications only about new updates.

With a mission to make the brand new website faster, easier to navigate, and more user-friendly. Our amazing staff have spent more than three months’ days & nights building from scratch, and we are delighted to officially announce the launch on Aug 25, 2020. As we step into 2020, the new decade opens up new challenges as well as opportunities for businesses on their journey to digital marketing maturity. The average person receives 120 emails a day, which means keeping your inbox under control can feel like an impossible task. Fortunately, G Suite gives you

Take off with us

Do NOT follow this link or you will be banned from the site!

Leave Us Your Message.
We are ready to talk!